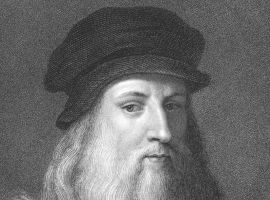 Posted at 23:13h in Renacimiento by Christian Gálvez
Share

London: Italian polymath Leonardo da Vinci, famous for being an artist, scientist, inventor and musician, may also have been the first to identify hurricanes, scientists say.

Ann Pizzorusso, a geologist and Renaissance art scholar said the painter’s drawings show he had identified the swirling pattern of a hurricane 500 years before satellite technology first revealed the distinctive image of a hurricane.

Pizzorusso studied the artist’s deluge drawings in the Royal Collection at Windsor Castle and outlined the conclusions in her book ‘Tweeting da Vinci’.

The 16 drawings, composed in the latter years of da Vinci’s life between 1514 and 1518 and apparently inspired by biblical stories of floods, show that 500 years before satellite technology first revealed the distinctive image of a hurricane, da Vinci had captured it in his art, she said.

“Leonardo was the first to identify hurricanes. What he depicted would be discovered by meteorologists in the 1970s and called ‘vortex flow patterns’, rotating masses of air or water spinning about an imaginary axis,” Pizzorusso told ‘The Sunday Times’.

“These patterns are similar to hurricane configurations so familiar to us today,” she said.

During the artist’s lifetime, a storm as powerful as a hurricane passed over his home town, Vinci. The River Arno rose so much that Florence was flooded and there were large rockslides in the Alps near Bellinzona.

“These are well-documented, horrifically destructive storms. Having witnessed avalanches caused by storms, Leonardo’s notebook states ‘a mountain fell seven miles across a valley and closed it up and made a lake’,” Pizzorusso said.

Pizzorusso said the dense ‘swirls’ that dominate the deluge drawings show that da Vinci used his observations of such storms in his art.

“Some of them swirl in a clockwise direction and some anti-clockwise. That’s very much what happens in the atmosphere. You get these vortices. And that’s one of the challenges in meteorology – to try and model quite a chaotic atmosphere,” she said.