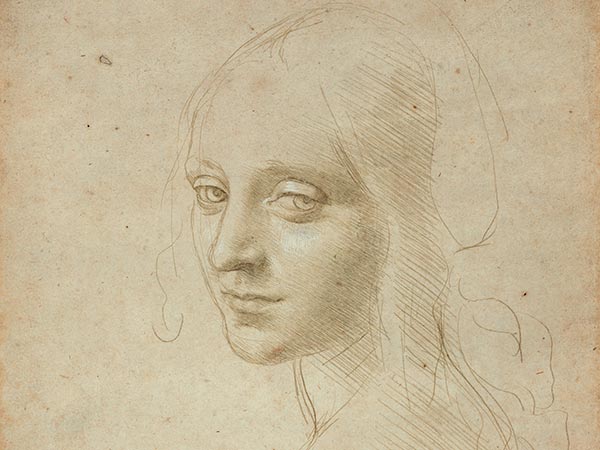 Posted at 16:15h in Renacimiento by Christian Gálvez
Share

Opening today, on what would have been Leonardo da Vinci’s 563rd birthday, the exhibition “Leonardo da Vinci and the Idea of Beauty” at the Museum of Fine Arts, Boston. The show will feature a recently rediscovered self-portrait of the artist and a suite of masterpieces by Leonardo including the long-admired Head of a Young Woman (Study for the Angel in the “Virgin of the Rocks”), a metalpoint drawing from the 1480s, widely renowned for its naturalism, and which art historian Kenneth Clark called the “most beautiful . . . in the world” (see Recently Rediscovered Leonardo da Vinci Painting Fetches $75 Million in Private Sale).

The exhibition marks a rare opportunity to see Head of a Young Woman, in the US. The work, which Bernard Berenson believed was “one of the finest achievements of all draughtsmanship,” belongs to the Biblioteca Reale in Turin, Italy.

Organized by the Muscarelle Museum of Art at the College of William & Mary, in Williamsburg, Virginia (see Newly Discovered Leonardo da Vinci Portrait on Display at the College of William and Mary), the show unites 30 works by Renaissance artists, including seven by Leonardo’s rival, Michelangelo (see Michelangelo’s Only Surviving Bronzes Discovered). Many of the works on view are loans from Italian institutions, including Florence’s Uffizi Museum.

Leonardo’s portrait, discovered five years ago, appears in the Codex on the Flight of Birds (circa 1505), where it is partially obscured by writing.

“If you like drawing, if you like Renaissance art, if you like Leonardo—this is a show you don’t want to miss,” MFA prints and drawings curator Helen Burnham told the Providence Journal.

The MFA isn’t the only American institution lucky enough to be showing rare works by Leonardo this year: the Codex Leicester, one of only 31 Leonardo notebooks known to exist, just finished up a stint at thePhoenix Art Museum and will travel to the Minneapolis Institute of Arts this summer (see Bill Gates’s Rare Leonardo da Vinci Notebook Comes to Minneapolis Institute of Arts).

“Leonardo da Vinci and the Idea of Beauty” will be on view at the MFA, Boston, April 15–June 14.

Foto: courtesy Biblioteca Reale, Turin, Italy; Muscarelle Museum of Art at the College of William & Mary in Virginia in partnership with the Associazione Culturale Metamorfosi; and the MFA, Boston.”