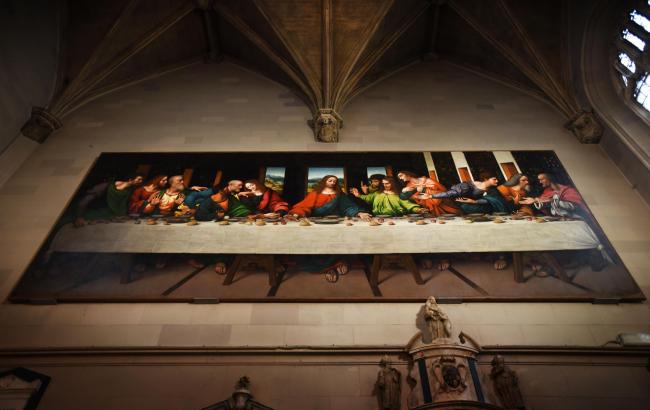 Posted at 01:15h in Renacimiento by Christian Gálvez
Share

AFTER 25 years at Magdalen College ante-chapel a precious painting of The Last Supper is to be returned to the Royal Academy of Arts in London.

The artwork, depicting the final meal shared by Jesus and his disciples in an upper room, is by 16th century Lombard artist Giovan Pietro Rizzoli, known as Giampietrino.

Giampietrino’s painting is now to be returned to the Royal Academy of Arts in London, which is undergoing refurbishment.

Its impending departure has brought back memories of its arrival in Oxford in September 1992, stretched on a vast metal drum and packed into a specially constructed wooden crate with 20 people in attendance.

The work of art has attracted a large number of visitors over the years, with some returning time after time.

The installation ceremony took place in March 1993 and art historian EH Gombrich lectured to a packed ante-chapel, after which the Bishop of Winchester blessed the painting and the choir sang an anthem composed for the occasion.

Annabel Potter, spokeswoman for Royal Academy of Arts, said one of the most significant outcomes of the Royal Academy’s transformative redevelopment, led by the internationally-acclaimed architect Sir David Chipperfield, was the creation of new spaces to showcase changing displays drawn from the 46,000 objects from the RA’s collections with free access all year round.

She added: “The Last Supper by Giampietrino, from about 1520, has been on loan to Magdalen College for 25 years and will shortly be returning to the Royal Academy of Arts to go on display in time for its 250th anniversary in 2018.

“In that time it was on temporary loan to the National Gallery, London.”

A pupil of Leonardo da Vinci, Giampietrino copied on to canvas the original work — the fresco in the refectory of the Milan monastery of Santa Maria delle Grazie — a few years after it was completed in 1498.